Welcome to the dedicated book release dates page for Deadly Cry. We gather all the latest book and novel news to bring you the most accurate new release schedule for Deadly Cry. 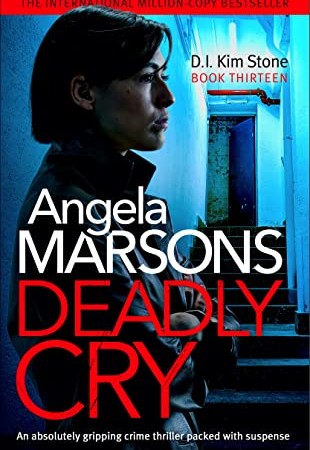 You have to stop me from hurting anyone else. I don’t want to do these horrible things. Help me before I’m forced to do it again. And I will do it again because I have no choice. I’ve never had a choice.

In a busy shopping centre, a little girl clutches a teddy bear, clinging to it in the absence of her mother, Katrina. Hours later, Katrina’s body is discovered in an abandoned building. For Detective Kim Stone, it looks like a quick, functional murder. But Kim’s instincts tell her there’s more to this senseless murder than meets the eye. What was the motive for killing a young mother out shopping with her child?

Days later, a second victim is found in a local park, her neck broken just like Katrina’s and her six-year-old son missing.

But with her colleague, Detective Stacey Wood, working on another unsolved crime and a member of the team grieving the loss of a close relative, Kim is struggling to make inroads on what is fast becoming a complex case. And when a handwritten letter from the killer lands on Kim’s desk addressed to her, and pleading for help, she knows time is running out to bring the little boy home alive.

With the support of a handwriting analyst and profiler, Kim and the team begin to get inside the mind of the killer and make a shocking discovery.

Some of the victims have scratch marks on their wrists.

But these are no random scratches. The killer is using them to communicate with someone. The question is… with whom?

And if Kim doesn’t find them soon, another innocent soul will die.

The multi-million-copy bestselling Detective Kim Stone series is every bit as addictive, original and exciting as readers say and you’ll be hooked from the very first page. Nobody does it better than the Queen of Crime, Angela Marsons.

Are you eagerly awaiting the release of Deadly Cry? Looking forward to reading Deadly Cry? Have you already got your hands on Deadly Cry?

Share your thoughts on Deadly Cry in the comments below!