The Library of Legends: A Novel
Buy on Amazon 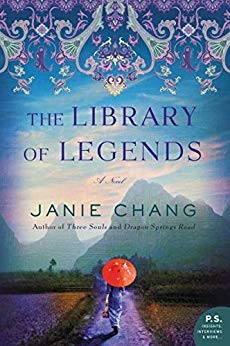 The Library of Legends

The Library of Legends RELEASE DATE

The Library of Legends Synopsis

From the author of Three Souls and Dragon Springs Road comes a captivating historical novel in which a convoy of student refugees travel across China, fleeing the hostilities of a brutal war with Japan

“Myths are the darkest and brightest incarnations of who we are . . .”

China, 1937. When Japanese bombs begin falling on the city of Nanking, nineteen-year-old Hu Lian and her classmates at Minghua University are ordered to flee. Lian and a convoy of students, faculty and staff must walk 1,000 miles to the safety of China’s western provinces, a journey marred by the constant threat of aerial attack. And it is not just the refugees who are at risk; Lian and her classmates have been entrusted with a priceless treasure: a 500-year-old collection of myths and folklore known as the Library of Legends.

The students’ common duty to safeguard the Library of Legends creates unexpected bonds. Lian becomes friends and forms a cautious romance with the handsome and wealthy Liu Shaoming. But after one classmate is arrested and another one is murdered, Lian realizes she must escape before a family secret puts her in danger too. Accompanied by Shao and his enigmatic maidservant, Sparrow, Lian makes her way to Shanghai in the hopes of reuniting with her mother.

During the journey, Lian learns of the connection between her two companions and a tale from the Library of Legends, The Willow Star and the Prince. This revelation comes with profound consequences, for as the ancient books travel across China, they awaken immortals and guardian spirits who embark on an exodus of their own, one that will change the country’s fate forever.

Share your thoughts on The Library of Legends in the comments below!