Home » Book Releases » When Will Into The War (Rise Of The Republic 3) By James Rosone Release? 2020 Sci-Fi Releases 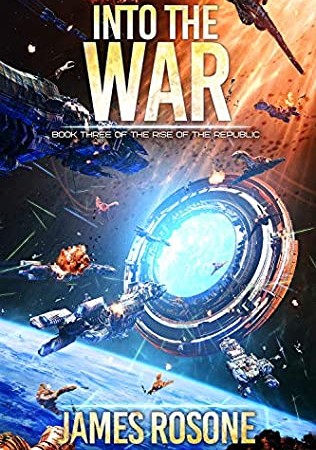 Into The War RELEASE DATE

Into The War Synopsis

Humanity stumbles into a galactic war…

…a war of survival, a conflict with no end

Earth has united under the banner of the Republic. Humanities brightest minds have deciphered the secrets to the alien technology and begin to reverse engineer it. An elder race takes notice of humanities strides and intervenes.

Humanity is brought into the fold of a galactic alliance, and learns they are not alone in their war against the insidious Zodark empire. Humans now fight alongside friendly alien races to end the bondages of slavery.

Earth leads a planet hopping campaign to destroy the Zodark empire and liberate tens of billions of people across the Milky Way galaxy.

Grab your copy of this gripping military sci-fi and find out today.

The Rise of the Republic Series is best read in order, as each book builds upon the previous work. The reading order is as listed:

Book One: Into the Stars

Book Two: Into the Battle

Book Three: Into the War

Share your thoughts on Into The War in the comments below!