Welcome to the dedicated book release dates page for AOC. We gather all the latest book and novel news to bring you the most accurate new release schedule for AOC.

AOC: The Fearless Rise of Alexandria Ocasio-Cortez and What It Means for America
Buy on Amazon 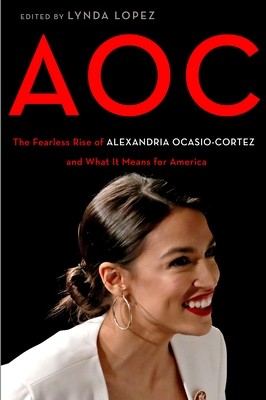 With a preface by Keegan-Michael Key

In the vein of Notorious RBG, seventeen writers explore the multiple meanings of a young Latina politician who has already made history.

From the moment Alexandria Ocasio-Cortez beat a ten-term incumbent in the primary election for New York’s 14th, her journey to the national, if not world, stage, was fast-tracked. Six months later, as the youngest Congresswoman ever elected, AOC became one of a handful of Latina politicians in Washington, D.C. Just thirty, she represents her generation, the millennials, in many groundbreaking ways: proudly working class, Democratic Socialist, of Puerto Rican descent, master of social media, not to mention of the Bronx, feminist—and a great dancer.

AOC investigates her symbolic and personal significance for so many, from her willingness to use her imperfect bi-lingualism, to the threat she poses by governing like a man, to the long history of Puerto Rican activism that she joins. Contributors span a wide range of voices and ages, from media to the arts and politics:

Are you eagerly awaiting the release of AOC? Looking forward to reading AOC? Have you already got your hands on AOC?

Share your thoughts on AOC in the comments below!