The Heart Principle
Buy on Amazon 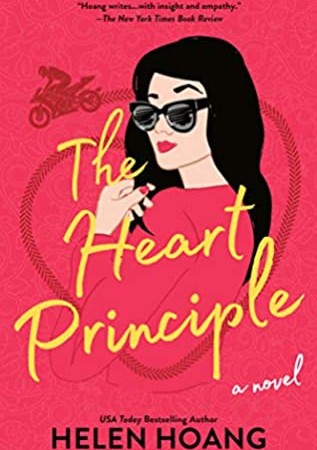 The Heart Principle
Buy on Amazon

USA Today bestselling author Helen Hoang returns with a witty and sizzling new romance that shows how wrong you can be about someone…and how right they can be for you.

To most people, Quan Diep is nothing but a surly-looking, underachieving playboy. The problem is he’s not any of those things. And now that he’s the CEO of an up-and-coming retail business, he’s suddenly a “catch,” and the rich girls who never used to pay any attention to him are looking at him in a new way—especially Camilla, the girl who brushed him off many years ago.

Anna Sun dislikes Quan Diep almost as much as germy bathroom door handles. Or so she tells herself. She will never admit that she has a secret crush on him, especially because he only has eyes for her charismatic and newly engaged younger sister Camilla. Over the years, Anna has worked hard to overcome her OCD, but she’ll still need to find a way to bury her anxieties and seduce Quan so he doesn’t ruin her sister’s engagement, and with it, a crucial real estate development deal.

Slowly, Anna breaks down Quan’s dangerous and careless exterior while peeling off her own tough, protective shell. But when Quan discovers Anna’s true intentions, he’s forced to confront his own hurtful past and learn to forgive, while Anna must face her greatest challenge: truly opening herself up to love.

Share your thoughts on The Heart Principle in the comments below!