Welcome to the dedicated book release dates page for Taína. We gather all the latest book and novel news to bring you the most accurate new release schedule for Taína. 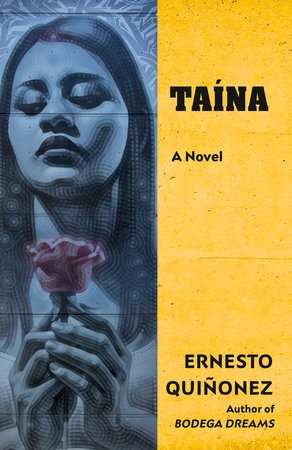 ABOUT TAÍNA
A uniquely dark, coming-of-age novel rife with urban magical realism, love, and redemption, from the author of Bodega Dreams

When Julio, a teenager living in Spanish Harlem, hears that Taina, a pregnant fifteen-year-old from his high school claims to be a virgin, he decides to believe her. Julio has a history of strange visions and his blind and unrequited love for Taina will unleash a whirlpool of emotions that will bring him to question his hard-working Puerto Rican mother and his communist Ecuadorian father, his beliefs and even the building blocks of modern science (after seeing the conception of Taina’s baby as a revolution in nature).

After meeting Taína’s uncle, “El Vejigante”, an ex-con with a dark past, he accepts his proposal to support her during her pregnancy and becomes entangled in a web of crime that, while taking him closer to Taína, ultimately reveals a family secret that will not leave him unscathed.

PRAISE
“Latin American magical realism leaps over any borders and ends up in the barrio of Spanish Harlem. A love story, coming-of-age story, a mystery, a whodunit story, and ultimately a story of true love in the broadest sense.” –Julia Álvarez, author of In the Time of Butterflies

“Taína is a searing search for the meaning in what we choose to believe and the stories we tell ourselves. […] This novel’s belief and trust in love is something we desperately need to hear”.
–Helena Viramontes, author of Under the Feet of Jesus

Are you eagerly awaiting the release of Taína? Looking forward to reading Taína? Have you already got your hands on Taína?

Share your thoughts on Taína in the comments below!