Welcome to the dedicated book release dates page for Savage Son. We gather all the latest book and novel news to bring you the most accurate new release schedule for Savage Son. 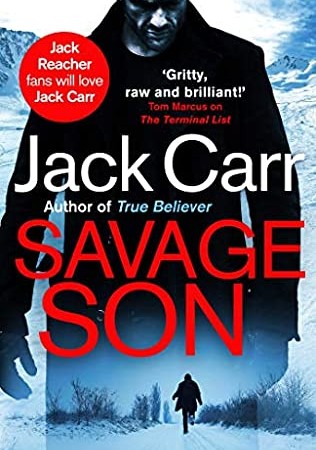 **SOON TO BE A TV SERIES STARRING CHRIS PRATT**

'Carr writes both from the gut and a seemingly infinite reservoir of knowledge in the methods of human combat. Loved it!' Chris Hauty, bestselling author of Deep State

Deep in the wilds of Siberia, a woman is on the run, pursued by a man harboring secrets – a man intent on killing her.

Half a world away, James Reece is recovering from brain surgery in the Montana wilderness, slowly putting his life back together with the help of investigative journalist Katie Buranek and his longtime friend and SEAL teammate Raife Hastings.

Unbeknown to them, the Russian mafia has set their sights on Reece in a deadly game of cat and mouse.

In his most visceral and heart-pounding thriller yet, Jack Carr explores the darkest instincts of humanity through the eyes of a man who has seen both the best and the worst of it.

'This is seriously good . . . the suspense is unrelenting, and the tradecraft is so authentic the government will probably ban it – so read it while you can!' Lee Child

'With a particular line in authentic tradecraft, this fabulously unrelenting thrill-ride was a struggle to put down' Mark Dawson

‘So powerful, so pulse-pounding, so well-written – rarely do you read a debut novel this damn good’ Brad Thor

'A powerful, thoughtful, realistic, at times terrifying thriller that I could not put down. A terrific addition to the genre, Jack Carr and his alter-ego protagonist, James Reece, continue to blow me away' Mark Greaney

Are you eagerly awaiting the release of Savage Son? Looking forward to reading Savage Son? Have you already got your hands on Savage Son?

Share your thoughts on Savage Son in the comments below!