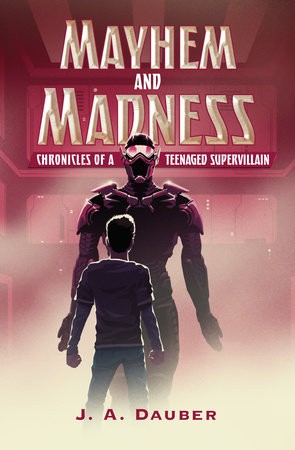 Mayhem and Madness: Chronicles Of A Teenaged Supervillain

A book by: J. A. Dauber
Publisher: Holiday House

Mayhem and Madness: Chronicles Of A Teenaged Supervillain RELEASE DATE

Mayhem and Madness: Chronicles Of A Teenaged Supervillain Synopsis

ABOUT MAYHEM AND MADNESS
Bailey never meant to be the bad guy in the bulletproof robotic suit, but with every mission he gets closer to finding his father . . . and he can’t stop now.

Bailey is a pretty average teenager in a pretty average town. He runs track, gets decent grades, and has an unrequited crush. So what is a super-powered flying suit of computerized armor doing twenty feet under his boring suburban home? Bailey needs to know where it came from, if it belonged to his long-missing father, and most importantly, if it can be used to bring his dad back.

This lightning-fast adventure inspired by classic comic book tales pushes a good kid to his limits and questions the difference between a hero and a villain. One day he’s getting beat up by the captain of the football team, the next day he’s robbing banks on Fifth Avenue, stealing diamonds from Tiffany’s, and zooming through aerial dogfights. But how much bad is Bailey willing to do to bring his dad home safely?

For fans of Iron Man, superhero stories, and dark humor.

PRAISE
“Clever twists and turns here along with strong character work. Bailey is a compelling protagonist, and the author smartly shades his parents enough to make their relationship just as interesting. . . . A nifty mystery with pleasant superhero twists.” —Kirkus Reviews

“Bailey’s comically honest narrative voice will pull readers along for the adventure with its endlessly engaging style. Dauber’s debut novel offers a hero’s journey from the perspective of a villain, perfect for fans of superhero stories in search of something new.”—Booklist

Share your thoughts on Mayhem and Madness: Chronicles Of A Teenaged Supervillain in the comments below!