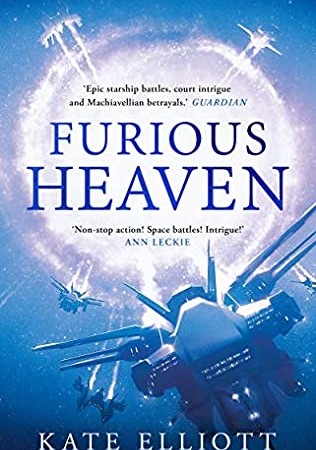 A book by: Kate Elliott
Publisher: Head of Zeus

Non-stop action, space battles and intrigue abound in the second in a galactic-scale, gender-swapped space opera trilogy inspired by the life of Alexander The Great.

The Republic of Chaonia fleets under the joint command of Princess Sun and her formidable mother, Queen-Marshal Eirene, have defeated and driven out an invading fleet of the Phene Empire, although not without heavy losses. But the Empire remains strong and undeterred. While Chaonia scrambles to rebuild its military, the Empire's rulers are determined to squash Chaonia once and for all by any means necessary.

On the eve of Eirene's bold attack on the rich and populous Karnos System, an unexpected tragedy strikes the republic. Sun must take charge or lose the throne. Will Sun be content with the pragmatic path laid out by her mother for Chaonia's future? Or will she forge her own legend despite all the forces arrayed against her?

Share your thoughts on Furious Heaven in the comments below!