Home » Book Releases » When Does Daughter Of The Salt King By A.S. Thornton Come Out? 2021 Fantasy Releases 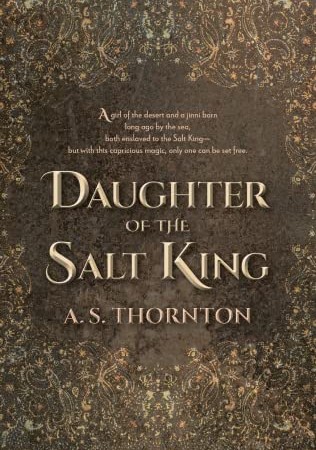 Daughter of the Salt King

Daughter of the Salt King Synopsis

As a daughter of the Salt King, Emel ought to be among the most powerful women in the desert. Instead, she and her sisters have less freedom than even her father's slaves … for the Salt King uses his own daughters to seduce visiting noblemen into becoming powerful allies by marriage.

Escape from her father's court seems impossible, and Emel dreams of a life where she can choose her fate. When members of a secret rebellion attack, Emel stumbles upon an alluring escape route: her father's best-kept secret—a wish-granting jinni, Saalim.

But in the land of the Salt King, wishes are never what they seem. Saalim's magic is volatile. Emel could lose everything with a wish for her freedom as the rebellion intensifies around her. She soon finds herself playing a dangerous game that pits dreams against responsibility and love against the promise of freedom. As she finds herself drawn to the jinni for more than his magic, captivated by both him and the world he shows her outside her desert village, she has to decide if freedom is worth the loss of her family, her home and Saalim, the only man she's ever loved.

Share your thoughts on Daughter of the Salt King in the comments below!