Until I Find You
View on Amazon 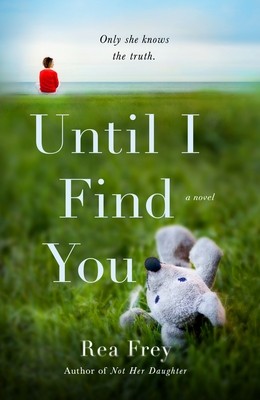 Until I Find You

Until I Find You RELEASE DATE

Until I Find You Synopsis

In Until I Find You, celebrated author Rea Frey brings you her most explosive, emotional, taut domestic drama yet about the powerful bond between mothers and children...and how far one woman will go to bring her son home.

Soon, Rebecca Gray won't be able to see. Diagnosed in her twenties with a degenerative eye disease, each day her world grows a little darker. She's moved to the suburbs to raise her son, Jackson. In the wake of her husband's death, it should be a quieter, easier way of life.

The Moment That Changes Everything

When Bec awakes after fainting in the park, she makes promises to start taking better care of herself. When her son begins to cry, she approaches the crib.

But he's not her son.

There's nothing Bec won't do to find Jackson. But she's a blind woman in a world where seeing is believing. The police think she's confused. Her friends don't see any differences. Relying on the conviction of her instinct and the power of a mother's love, Bec must push the limits of her world to uncover what happened to her baby boy...and bring him home for good.

Share your thoughts on Until I Find You in the comments below!