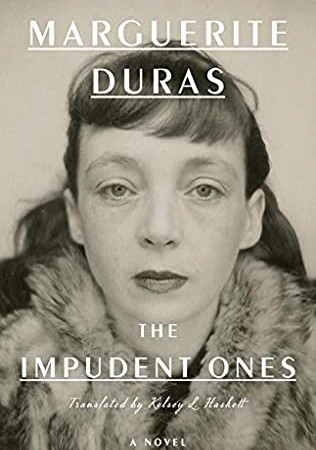 The Impudent Ones RELEASE DATE

The Impudent Ones Synopsis

Published for the first time in English, the debut novel of Marguerite Duras—renowned author of The Lover and The War—is the story of a family’s moral reckoning and a daughter’s fall from grace

Marguerite Duras rose to global stardom with her erotic masterpiece The Lover(L’Amant), which won the prestigious Prix Goncourt, has over a million copies in print in English, has been translated into forty-three languages, and was adapted into a canonical film in 1992. While almost all of Duras’s novels have been translated into English, her debut The Impudent Ones(Les Impudents) has been a glaring exception—until now. Fans of Duras will be thrilled to discover the germ of her bold, vital prose and signature blend of memoir and fiction in this intense and mournful story of the Taneran family, which introduces Duras’s classic themes of familial conflict, illicit romance, and scandal in the sleepy suburbs and southwest provinces of postwar France.

Duras’s great gift was her ability to bring vivid and passionate life to characters with whom society may not have sympathized, but with whom readers certainly do. With storytelling that evokes in equal parts beauty and brutality, The Impudent Ones depicts the scalding effects of seduction and disrepute on the soul of a young French girl.

Including an essay on the story behind The Impudent Ones by Jean Vallier—biographer of the late Duras—which contextualizes the origins of Duras’s debut novel, this one-of-a-kind publishing endeavor will delight established Duras fans and a new generation of readers alike.

Share your thoughts on The Impudent Ones in the comments below!