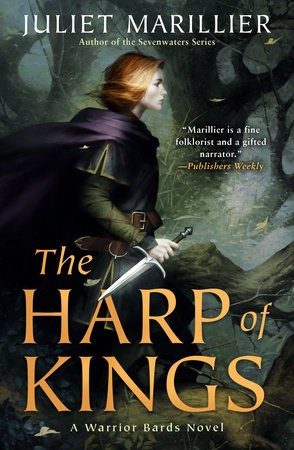 The Harp Of Kings

The Harp Of Kings RELEASE DATE

The Harp Of Kings Synopsis

ABOUT THE HARP OF KINGS
A young woman is both a bard—and a warrior—in this thrilling historical fantasy from the author of the Sevenwaters novels.

Eighteen-year-old Liobhan is a powerful singer and an expert whistle player. Her brother has a voice to melt the hardest heart, and is a rare talent on the harp. But Liobhan’s burning ambition is to join the elite warrior band on Swan Island. She and her brother train there to compete for places, and find themselves joining a mission while still candidates. Their unusual blend of skills makes them ideal for this particular job, which requires going undercover as traveling minstrels. For Swan Island trains both warriors and spies.

Their mission: to find and retrieve a precious harp, an ancient symbol of kingship, which has gone missing. If the instrument is not played at the upcoming coronation, the candidate will not be accepted and the kingdom will be thrown into disarray. Faced with plotting courtiers and tight-lipped druids, an insightful storyteller, and a boorish Crown Prince, Liobhan soon realizes an Otherworld power may be meddling in the affairs of the kingdom. When ambition clashes with conscience, Liobhan must make a bold decision—and the consequences may break her heart.

PRAISE
Praise for The Harp of Kings

“This big-hearted novel completely transported me to the wonder and enchantment of ancient Ireland—and its resonance lingered long after the final page.”–Callie Bates, author of The Waking Land

Praise for Juliet Marillier and her fantasy novels

Share your thoughts on The Harp Of Kings in the comments below!