Welcome to the dedicated book release dates page for Smash It!. We gather all the latest book and novel news to bring you the most accurate new release schedule for Smash It!.

Smash It!
Buy on Amazon 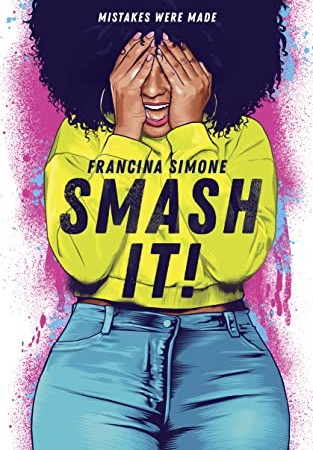 Refreshingly authentic and bold… Don’t miss this smashing #ownvoices novel from Francina Simone! Filled with heart, humor and a heroine to root for, Smash It! is a perfect read for fans of Julie Murphy, Ibi Zoboi and Ashley Poston.

Olivia “Liv” James is done with letting her insecurities get the best of her. So she does what any self-respecting hot mess of a girl who wants to SMASH junior year does…

After Liv shows up to a Halloween party in khaki shorts—why, God, why?—she decides to set aside her wack AF ways. She makes a list—a F*ck-It list.

1. Be bold—do the thing that scares me.

2. Learn to take a compliment.

3. Stand out instead of back.

She kicks it off by trying out for the school musical, saying yes to a date and making new friends. Life is great when you stop punking yourself! However, with change comes a lot of missteps, and being bold means following her heart. So what happens when Liv’s heart is interested in three different guys—and two of them are her best friends? What is she supposed to do when she gets dumped by a guy she’s not even dating? How does one Smash It! after the humiliation of being friend-zoned?

In Liv’s own words, “F*ck it. What’s the worst that can happen?”

Are you eagerly awaiting the release of Smash It!? Looking forward to reading Smash It!? Have you already got your hands on Smash It!?

Share your thoughts on Smash It! in the comments below!