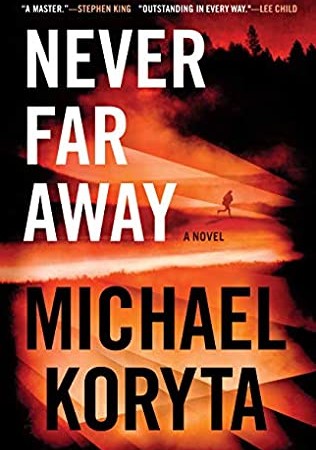 A book by: Michael Koryta
Publisher: Little Brown and Company

New York Times bestselling author Michael Koryta, the "master" (Stephen King) of American thriller writing, returns with an electrifying new novel set in Maine about a mother seeking to regain custody of her children after a terrible trial tears their family apart.

Once a wife, mother, and witness to a gruesome crime, Leah Trenton was extended a miraculous olive branch in the form of the state's protected witness program. But for this second chance at life, Leah would have to leave behind her Midwestern roots to the northernmost tip of Maine. Alone and isolated along the banks of the Allagash River, she is determined to focus on the present, on her reclaimed future, but the demons of her past, are relentlessly chipping away at Leah's protected hideaway.

Meanwhile, in the wake of their father's untimely death, Leah's children are sent to stay with her, though they are desperate to return back home. They embark on a cross country homeward journey but before they reach, danger finds them and it is Leah who must come out of her seclusion to search for and protect her children.

Told with the deft plotting and enthralling storytelling of a genre master, these two captivating chase narratives will converge along the rugged Allagash River, in the wilds of Maine, where the wills, morals, and ingenuity of a broken family will be tested against all odds.
-------------

"Koryta has crafted another shivery story with a killer of a start and a nail-biting ending...yet without scrimping on the heart and humanity of the characters, both good and evil." - Sandra Brown

"Koryta's expert plotting is on full display as he masterfully introduces one intriguing character after another, weaving their stories together while leading all of them--and the reader--to a stunning finale. Never Far Away is a must-read for thriller fans." - Alafair Burke

"A new Koryta is an automatic must-read for me, but seriously - this one is special. What a ride! It might be the best thriller you'll read this year." - Lee Child

"In this complex, surprising, and totally satisfying suspense novel, all of the moving parts, every character, every scene leads to one of the best showdowns I've read in years." - James Patterson

"Michael Koryta is a powerful and masterful writer with bone-deep understanding of his characters, and a gift for perfectly- paced suspense. With its transporting sense of place, and elegantly layered but utterly breathless story, Never Far Away is the raw, emotional, and riveting work of a craftsman at the top of his game. By far one of the best books I've read this year." - Lisa Unger

Share your thoughts on Never Far Away in the comments below!