Lords of the Nile: An epic Napoleonic adventure of invasion and espionage (The William John Hazzard series Book 2)
Buy on Amazon 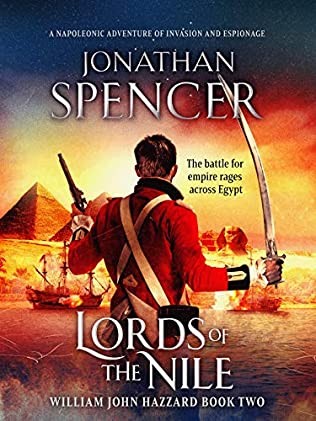 Lords Of The Nile

Lords Of The Nile RELEASE DATE

Lords Of The Nile Synopsis

The battle for Empire rages across Egypt
The thrilling second novel in the William John Hazzard series, following Napoleon's Run.

Malta, June 1798. Captured by the French after hurling himself into the enemy ranks, Hazzard is now a prisoner of Bonaparte and his nemesis, the spy-catcher Derrien. He has, however, uncovered the deadly purpose of Napoleon’s fleet: the conquest of Egypt.

Their bold plan is to cut open the ancient Suez Canal and then sail through the Red Sea to attack India, the jewel in England’s crown.

As Napoleon's great armada prepares to sail, Nelson’s fleet, still scouring the Mediterranean in vain for the French, is nowhere to be seen. If Hazzard can't find a way to stop this – no-one will.

But help comes from an unexpected quarter – the missing Admiralty agent…

From the shores of Malta to the truly epic encounter of the Battle of the Nile – this is the explosive beginning of the French invasion of Egypt. Never give up the boat.

Praise for Jonathan Spencer
‘This is an outstanding novel, made even more remarkable by its début status. Better than Sharpe, gripping and intense, Napoleon’s Run deserves to be a runaway success’ Ben Kane, Sunday Times bestselling author of Lionheart

'Outstanding... Packed to the gunwales with action. Hazzard is not only a convincing action hero, but also one who offers a timeless insight into loyalty, trust and honesty. A thumping read' Chris Lloyd, author of The Unwanted Dead on Napoleon's Run

‘This book has a rich cast of characters who will delight, enthral and keep you turning the pages to the very end. A brilliant, thrilling read, with a new – and very believable – hero. This is my favourite historical novel of the year so far’ Michael Jecks, author of the Last Templar Mysteries on Napoleon's Run

Share your thoughts on Lords Of The Nile in the comments below!