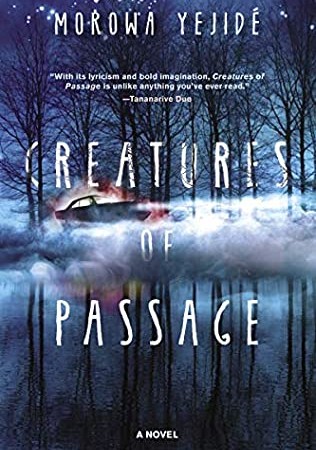 With echoes of Toni Morrison's Beloved, Yejidé's novel explores a forgotten quadrant of Washington, DC, and the ghosts that haunt it.

"In this beautifully written and gloriously conceived novel, Morowa Yejidé reveals her mastery yet again. This book is both contemporary and ancient, frightening and stirring, playful and wise, an unforgettable blurring of reality and genres from its haunted Plymouth automobile to the mysteries in the fog in this alternate America and hidden Washington, DC. With its lyricism and bold imagination, Creatures of Passage is unlike anything you've ever read."
--Tananarive Due, author of Ghost Summer: Stories

"Comparisons will be made to Toni Morrison and they will be well-founded, but Morowa Yejidé is in a class of her own with Creatures of Passage, a mesmerizing tale about love, loss, revenge, death, and restoration that hovers close to the edge of fantasy yet is deeply grounded in history and in a reality easily recognizable in the contemporary world."
--Elizabeth Nunez, author of Even in Paradise

"Although set in our recent past, Creatures of Passage is at heart a powerful ghost story about people haunted by the shadows of time and the shadows of blood. In the pages of this novel we discover a world that is fully recognizable, as concrete and real as Toni Morrison's Ohio, but also as fantastic and mythical as Gabriel García Márquez's Macondo. That said, make no mistake: Morowa Yejidé is a masterful storyteller in her own right, able to spin and sustain an inventive tale illuminated by a singular truth, that death is 'another form of living.'"
--Jeffery Renard Allen, author of Song of the Shank

Nephthys Kinwell is a taxi driver of sorts in Washington, DC, ferrying passengers in a 1967 Plymouth Belvedere with a ghost in the trunk. Endless rides and alcohol help her manage her grief over the death of her twin brother, Osiris, who was murdered and dumped in the Anacostia River.

Unknown to Nephthys when the novel opens in 1977, her estranged great-nephew, ten-year-old Dash, is finding himself drawn to the banks of that very same river. It is there that Dash--reeling from having witnessed an act of molestation at his school, but still questioning what and who he saw--has charmed conversations with a mysterious figure he calls the "River Man."

When Dash arrives unexpectedly at Nephthys's door bearing a cryptic note about his unusual conversations with the River Man, Nephthys must face what frightens her most.

Morowa Yejidé's deeply captivating novel shows us an unseen Washington filled with otherworldly landscapes, flawed super-humans, and reluctant ghosts, and brings together a community intent on saving one young boy in order to reclaim itself.

Share your thoughts on Creatures Of Passage in the comments below!