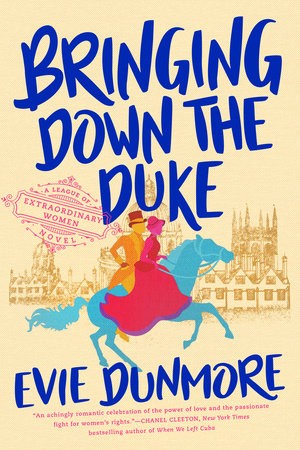 Bringing Down the Duke: A League of Extraordinary Women, Book 1
Buy on Amazon

Bringing Down The Duke

Bringing Down The Duke RELEASE DATE

Bringing Down The Duke Synopsis

A stunning debut for author Evie Dunmore and her Oxford Rebels in which a fiercely independent vicar’s daughter takes on a powerful duke in a fiery love story that threatens to upend the British social order.

England, 1879. Annabelle Archer, the brilliant but destitute daughter of a country vicar, has earned herself a place among the first cohort of female students at the renowned University of Oxford. In return for her scholarship, she must support the rising women’s suffrage movement. Her charge: recruit men of influence to champion their cause. Her target: Sebastian Devereux, the cold and calculating Duke of Montgomery who steers Britain’s politics at the Queen’s command. Her challenge: not to give in to the powerful attraction she can’t deny for the man who opposes everything she stands for.

Sebastian is appalled to find a suffragist squad has infiltrated his ducal home, but the real threat is his impossible feelings for green-eyed beauty Annabelle. He is looking for a wife of equal standing to secure the legacy he has worked so hard to rebuild, not an outspoken commoner who could never be his duchess. But he wouldn’t be the greatest strategist of the Kingdom if he couldn’t claim this alluring bluestocking without the promise of a ring…or could he?

Locked in a battle with rising passion and a will matching her own, Annabelle will learn just what it takes to topple a duke….

PRAISE
Bringing Down the Duke

“Evie Dunmore’s debut is a marvel. Set against the backdrop of the British suffrage movement, Bringing Down the Duke is a witty, richly detailed, historically significant, and achingly romantic celebration of the power of love and the passionate fight for women’s rights. A stunning blend of history and romance that will enchant readers.”—Chanel Cleeton, New York Times bestselling author of When We Left Cuba

“Evie Dunmore’s Bringing Down the Duke dazzles and reminds us all why we fell in love with historical romance.”—Julia London, New York Times bestselling author of Seduced by a Scot

“Dunmore’s beautifully written debut perfectly balances history, sexual tension, romantic yearning, and the constant struggle smart women have in finding and maintaining their places and voices in life and love, with the added message that finding the right person brings true happiness and being with them is worth any price. A brilliant debut.”—Kirkus Reviews (starred review)

“What an absolutely stunning, riveting, painfully gorgeous book! It’s going straight to my keeper shelf, and I will be buying a copy the moment it comes out to reread again and again. It’s not only the best historical romance I’ve read in a long, long time, it’s one of the best books I’ve ever read! I adored it!”—Megan Crane, USA Today bestselling author of Sniper’s Pride

“Bringing Down the Duke is the best historical romance I’ve read all year. I was spellbound by this story of forbidden love between a spirited, clever Suffragette heroine and her straitlaced duke, a man who proves that fire burns hottest when it’s under ice. Evie Dunmore is a marvelous, fresh new voice in romance who is sure to go far. Don’t miss her brilliant debut!”—Anna Campbell, bestselling author of the Dashing Widows series

“Evie Dunmore’s Bringing Down the Duke delivers the best of two worlds—a steamy romance coupled with the heft of a meticulously researched historical novel….Readers will be entranced watching Annabelle, a woman ahead of her time, bring the sexy Duke to his knees.”—Renée Rosen, author of Park Avenue Summer

“I have read the future of historical romance, and it’s Evie Dunmore.”—Eva Leigh, author of Dare to Love a Duke

“A deliciously original debut featuring a fiercely passionate suffragette who melts an icy duke’s heart. Set against the backdrop of the fight for women’s rights, Bringing Down the Duke is the perfect blend of romance and history.”—Diana Quincy, author of The Rebellious Brides Series

“Evie Dunmore has written a story we need right now—strong, smart, and passionate, featuring a heroine who won’t settle for less than what she deserves and a swoony hero who learns to fight for what really matters. With her debut novel, Dunmore has instantly become a must-read for me.”—Lyssa Kay Adams, author of The Bromance Book Club

Share your thoughts on Bringing Down The Duke in the comments below!