A Curse of Gold (Blink)
Buy on Amazon 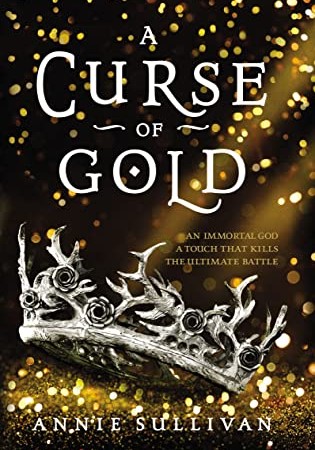 A Curse of Gold

A Curse of Gold RELEASE DATE

A Curse of Gold Synopsis

Curses and queens. Pirates and kings. Gods and magic. This highly anticipated sequel to Annie Sullivan’s enchanting A Touch of Gold, the story of the daughter King Midas turned to gold, is the gripping crescendo to this sweeping fantasy adventure. The final saga of a cursed queen, a vengeful Greek god, and a dazzling kingdom in the balance.

After barely surviving thieving, bloodthirsty pirates and a harrowing quest at sea to retrieve her stolen treasure, Kora finds readjusting to palace life just as deadly. Kora’s people openly turn against her, threatening her overthrow as heir to the throne—a cursed queen who has angered Dionysus. When Dionysus puts out a challenge to kill the girl with the golden touch and burn down her kingdom, it’s not just her future on the throne in danger. Kora’s life and entire kingdom are now on contract.

As bold and brave as ever, Kora sets out to find Dionysus, the very person who is trying to kill her, on the mysterious disappearing island of Jipper. Kora has no other choice. If she wants to save her kingdom and have any chance at reversing her father’s curse, she will have to enter into a deadly game with Dionysus, the greatest trickster the world, or the underworld, has ever seen.

A Curse of Gold:

Is the highly-anticipated sequel to A Touch of Gold by author Annie Sullivan
Is an enchanting and captivating fantasy adventure/fairy tale retelling, perfect for fans of The Wrath and the Dawn and Cinder

Is told from the perspective of Kora, King Midas’s daughter and a strong female protagonist
Features a beautifully decorated cover
Will have strong appeal to readers ages 13 & up

Share your thoughts on A Curse of Gold in the comments below!