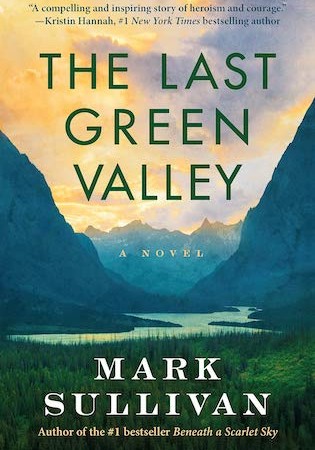 “Mark Sullivan has done it again! The Last Green Valley is a compelling and inspiring story of heroism and courage in the dark days at the end of World War II.” —Kristin Hannah, #1 New York Times bestselling author

From the author of the #1 bestseller Beneath a Scarlet Sky comes a new historical novel inspired by one family’s incredible story of daring, survival, and triumph.

In late March 1944, as Stalin’s forces push into Ukraine, young Emil and Adeline Martel must make a terrible decision: Do they wait for the Soviet bear’s intrusion and risk being sent to Siberia? Or do they reluctantly follow the wolves—murderous Nazi officers who have pledged to protect “pure-blood” Germans?

The Martels are one of many families of German heritage whose ancestors have farmed in Ukraine for more than a century. But after already living under Stalin’s horrifying regime, Emil and Adeline decide they must run in retreat from their land with the wolves they despise to escape the Soviets and go in search of freedom.

Caught between two warring forces and overcoming horrific trials to pursue their hope of immigrating to the West, the Martels’ story is a brutal, complex, and ultimately triumphant tale that illuminates the extraordinary power of love, faith, and one family’s incredible will to survive and see their dreams realised.

Share your thoughts on The Last Green Valley in the comments below!