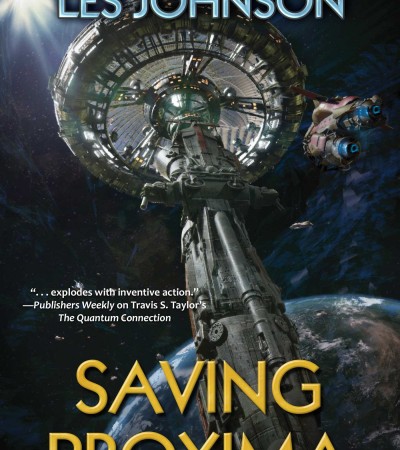 A message from space leads to a desperate race against time and across space to our nearest stellar neighbor in a new hard science fiction thriller from Travis S. Taylor and Les Johnson.

THE ANSWER LIES OUT THERE

The year is 2072. At the lunar farside radio observatory, an old-school radio broadcast is detected, similar to those broadcast on Earth in the 1940s, but in an unknown language, coming from an impossible source, and originating at an equally impossible location—Proxima Centauri. While the nations of Earth debate making first contact, they learn that the Proximans are facing an extinction-level disaster, forcing a decision: will Earth send a ship on a multiyear trip to provide aid?

Interstellar travel is not easy, and by traveling at the speeds required to arrive before disaster strikes at Proxima, humans will learn firsthand the effects of Einstein’s Special Relativity and be forced to ponder the ultimate of questions of "Are we alone in the universe?” and “What does it mean to be human?”

About Stellaris: People of the Stars, coedited by Les Johnson:
“[A] thought-provoking look at a selection of real-world challenges and speculative fiction solutions. . . . Readers will enjoy this collection that is as educational as it is entertaining.”—Booklist

“This was an enjoyable collection of science fiction dealing with colonizing the stars. In the collection were several gems and the overall quality was high.”—Tangent

About Mission to Methone, by Les Johnson:
“The spirit of Arthur C. Clarke and his contemporaries is alive and well in Johnson’s old-fashioned first-contact novel, set in 2068. . . . includes plenty of realistic detail and puts fun new spins on familiar alien concepts. . . . There’s a great deal here for fans of early hard SF.”—Publishers Weekly

“With equal parts science fiction and international intrigue. . . . an exciting, fast-paced read that you will not want to put down.”—Booklist

About Rescue Mode, by Ben Bova and Les Johnson:
“. . . a suspenseful and compelling narrative of the first human spaceflight to Mars.”—Booklist

Share your thoughts on Saving Proxima in the comments below!