Welcome to the dedicated book release dates page for Armageddon. We gather all the latest book and novel news to bring you the most accurate new release schedule for Armageddon. 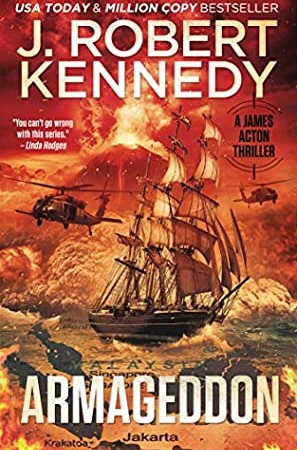 IN 1883, A MASSIVE ERUPTION CONVINCES SOME IT’S THE END OF THE WORLD.
AND TODAY, ANOTHER LEADS TO A DESPERATE STRUGGLE TO SAVE AN ISOLATED CIVILIZATION.

Archaeology Professors James Acton and Laura Palmer are fleeing for their lives, pursued by criminals hellbent on possessing a valuable find, when an eruption the likes of which hasn’t been seen in over a century overwhelms both the professors and their pursuers.

The Actons find themselves marooned on a forbidden island, populated by an uncontacted tribe known for their violent reaction to any intruders, leaving the survivors fleeing another foe.

But when this isolated tribe comes under attack itself, the professors are left with an impossible choice.

Save themselves while they await rescue, letting these ancient peoples die, or risk death by revealing themselves and intervening.
In Armageddon, award winning and USA Today bestselling author J. Robert Kennedy once again mixes history and the problems of today in a riveting survival story sure to keep you on the edge of your seat. If you enjoy fast-paced adventures in the style of Dan Brown, Clive Cussler, and James Rollins, then you’ll love this thrilling tale of archaeological intrigue.

Get your copy of Armageddon now, and discover what happens when the present threatens to overwhelm the past, forcing the best, and worst, of humanity to the surface.

About the James Acton Thrillers:

Though this book is part of the James Acton Thrillers series, it is written as a standalone novel and can be enjoyed without having read any other installments.

The James Acton Thrillers series and its spin-offs, the Special Agent Dylan Kane Thrillers and the Delta Force Unleashed Thrillers, have sold over one million copies. If you love non-stop action and intrigue with a healthy dose of humor, try James Acton today!

★★★★★ “A great blend of history and current headlines.”

Are you eagerly awaiting the release of Armageddon? Looking forward to reading Armageddon? Have you already got your hands on Armageddon?

Share your thoughts on Armageddon in the comments below!