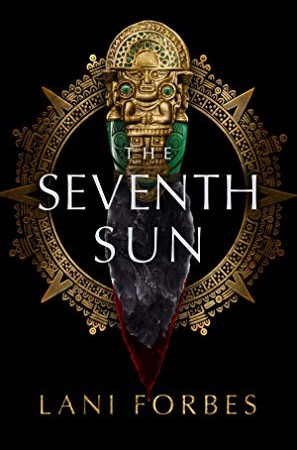 The sun of the Chicome people has been destroyed six times. First by water, then by storm, fire, famine, sickness, and beasts. After each apocalypse, the creator goddess allowed one of her divine children to sacrifice themselves to save civilization. The gods paid their blood as the price for the lives of the people, and the people owed them blood in return.

Mayana is a noble descendant of the water goddess and can control water whenever her blood is spilled. She has always despised the brutal rituals of her people — especially sacrifices. She can’t even make it through a routine animal sacrifice without embarrassing her family. Prince Ahkin has always known he would be emperor, but he didn’t expect his father to die so suddenly. Now he must raise the sun in the sky each day and read the signs in the stars. But the stars now hint at impending chaos and the sun has begun setting earlier each evening. Ahkin fears he might not be strong enough to save his people from another apocalypse. And to add to his list of worries, he can’t truly become emperor until he selects a wife.

Mayana and six other noble daughters are sent to the palace to compete for Ahkin’s hand. She must prove she is a true daughter of water and face the others who have their own magical gifts from wielding the elements to the control of animals, plants and healing. And in a society centered on rigid rituals, Mayana must conceal her traitorous beliefs because if she doesn’t make Ahkin love her, she will become a ceremonial sacrifice to bless his marriage. But darker forces are at play and it won’t matter if Mayana loses if the world ends first…

Rich in imagination and romance, and based on the legends and history of the Aztec and Mayan people, The Seventh Sun brings to vivid life a world on the edge of apocalyptic disaster.

Share your thoughts on The Seventh Sun in the comments below!