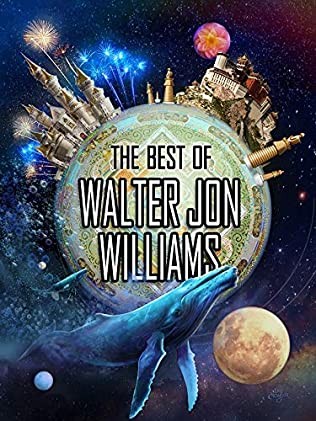 The Best of Walter Jon Williams

With the publication of his debut novel, The Privateer, in 1981, Walter Jon Williams began one of the most varied and prolific careers in contemporary popular fiction. His work encompasses cyberpunk (Hardwired), military SF (The Dread Empire's Fall series), humor (The Crown Jewels), even disaster fiction (The Rift). But much of Williams's best work takes place in the shorter forms, as this generous volume, filled to overflowing with award-winning and award-nominated stories, clearly proves. With one exception, The Best of Walter Jon Williams reflects its author's affection for—and mastery of—the novella form. That exception is “The Millennium Party,” a brief, brilliant account of a virtual anniversary celebration unlike any you have ever imagined. Elsewhere in the collection, Williams offers us one brilliantly sustained creation after another. The Nebula Award-winning “Daddy's World” takes us into a young boy's private universe, a world of seeming miracles that conceals a tragic secret. “Dinosaurs” is the far future account of the incredibly destructive relationship between the star-faring human race and the less evolved inhabitants of the planet Shar. “Diamonds from Tequila” is a lovingly crafted example of SF Noir in which a former child actor attempts a comeback that proves unexpectedly dangerous. “Surfacing” is a tale of alienation featuring a research scientist more at home with the foreign and unfamiliar than with the members of his own species. Finally, the magisterial “Wall, Stone, Craft” offers a brilliantly realized alternate take on a young Mary Godwin, future creator of Frankenstein, and her relationships with the poets Percy Bysshe Shelley and Lord Byron, culminating in the creation of a monster who would “stalk through the hearts of all the world.” These stories, together with half a dozen equally substantial tales, are the clear product of a master craftsman with a seemingly limitless imagination. The Best of Walter Jon Williams is the capstone of a truly remarkable career. It's the rare sort of book that the reader can return to again and again, finding new and unexpected pleasures every time out.

Share your thoughts on The Best of Walter Jon Williams in the comments below!