Home » Book Releases » When Does Night Of The Mannequins By Stephen Graham Jones Come Out? 2020 Horror Releases

Night of the Mannequins
Buy on Amazon 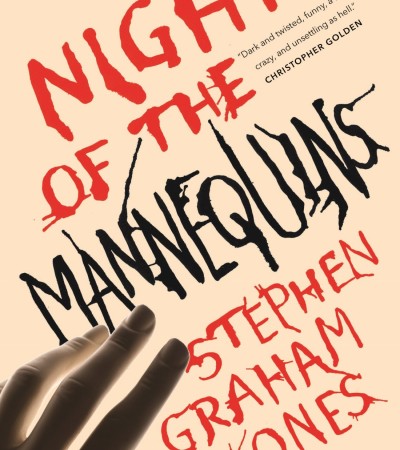 Night of the Mannequins
Buy on Amazon

Night of the Mannequins

Night of the Mannequins RELEASE DATE

Night of the Mannequins Synopsis

Stephen Graham Jones returns with Night of the Mannequins, a contemporary horror story where a teen prank goes very wrong and all hell breaks loose: is there a supernatural cause, a psychopath on the loose, or both?

Praise for Night of the Mannequins

“Reading Stephen Graham Jones is like sitting in the corner of a bar with an old friend, and everyone quiets down the moment they start telling a story. Night of the Mannequins is dark and twisted, funny, a little crazy, and unsettling as hell. The opening setup gets way under your skin, and then Jones takes the story somewhere much darker than you imagined. If there’s an heir apparent to the kind of no-rules, wild imagination, down home storytelling perfected by Joe R. Lansdale, it’s this guy right here. Read him.”—Christopher Golden

"Sly, surprising psychic sleight-of-hand, in a tale of teenage madness where the next plastic face might be your own."—John Skipp

"Wicked and wry, this is a terrific story by one of my favorite writers, Stephen Graham Jones. Tip-top with a twist of dead. The narrator's first person delivery is the most notable aspect of this surprising and creepy tale that nods to popular stalker-killer films of the past, but is so much better than the bulk of those films, and what an ending. You definitely need this."—Joe R. Lansdale

"Stephen Graham Jones' has one of the most gripping, stream-of-consciousness voices in horror fiction. Night of the Mannequins is propulsive and poignant, capturing the mundane terror of adolescence, and adding that ever-so-essential dab of killer mannequin. You won't put it down." —Sarah Langan

Share your thoughts on Night of the Mannequins in the comments below!