Home » Book Releases » When Does ‘Her Only Hope’ (Frankie Black Files) Book Come Out? 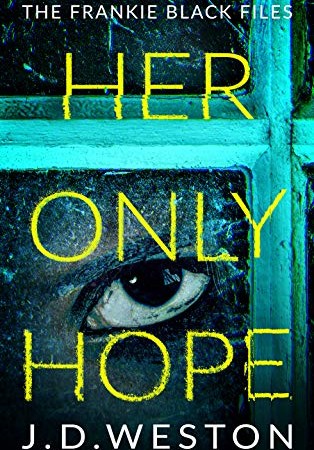 Her Only Hope (Frankie Black Files)

When the door slams, your world is damned!
Hope Gilmour was born bad. Cruel blood runs through her veins and she is loathed even by those who should love her.

But when Hope falls prey to a mysterious group, she discovers that she must make the ultimate sacrifice to save an innocent child.

With one last chance to redeem herself, she must relive her terrible past and search for the kindness inside her. The trouble is, her ordeal only serves to enrage her darker side even more.

Bound with chains and blinded by darkness, she prepares for her fate, until she discovers that she’s not alone.

Frankie Black finds people. It’s all he’s ever known and the one thing he’s good at. Lost in a cycle of grief over the death of his wife, the desire to fade away pulls at his very core.

The call to find Hope Gilmour stirs something inside him. Merely a distraction from his suffering or a shot at redemption? Surrounding himself with death will force him to deal with his loss… or break him in the process.

Can Frankie unpick the web of deceit that threatens an entire community and bring a killer to justice? Can he rescue Hope before her she destroys herself and those closest to her? Will Frankie find the peace he craves in life or die trying?

Her Only Hope is the second book in the gripping and terrifying, Frankie Black Files.

If you enjoy the twists and turns of mysteries, the drama and tension of psychological thrillers and love to lose yourself in the minds and emotions of the darkest characters, then download Her Only Hope and meet Frankie Black now.

Share your thoughts on Her Only Hope (Frankie Black Files) in the comments below!