The Four Profound Weaves: A Birdverse Book
Buy on Amazon 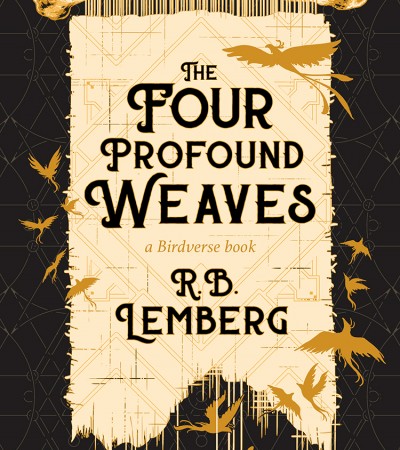 Wind: To match one's body with one's heart
Sand: To take the bearer where they wish
Song: In praise of the goddess Bird
Bone: To move unheard in the night

The Surun' do not speak of the master weaver, Benesret, who creates the cloth of bone for assassins in the Great Burri Desert. But Uiziya now seeks her aunt Benesret in order to learn the final weave, although the price for knowledge may be far too dear to pay.

Among the Khana, women travel in caravans to trade, while men remain in the inner quarter as scholars. A nameless man struggles to embody Khana masculinity, after many years of performing the life of a woman, trader, wife, and grandmother.

As the past catches up to the nameless man, he must choose between the life he dreamed of and Uiziya, and Uiziya must discover how to challenge a tyrant, and weave from deaths that matter.

Set in R. B. Lemberg's beloved Birdverse, The Four Profound Weaves hearkens to Ursula Le Guin's The Left Hand of Darkness. In this breathtaking debut, Lemberg offers a timeless chronicle of claiming one's identity in a hostile world.

Share your thoughts on The Four Profound Weaves in the comments below!