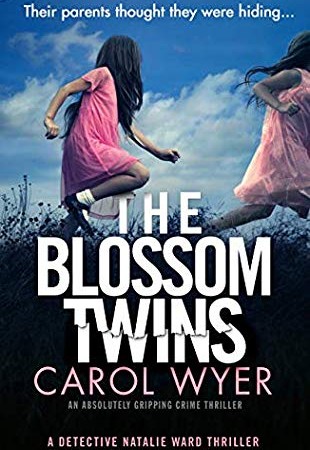 Their parents thought they were hiding…

One beautiful summer’s evening, thirteen-year-old twins Ivy and Erin Westmore snuggle down in a tent in their back garden, giggling and sharing secrets.

When their mother goes to wake the girls the next morning, their tent is empty.

The alarm is raised and Detective Natalie Ward is put onto the case. When the twins’ bodies are discovered on nearby marshland, covered with deep pink petals, an icy shiver travels down Natalie’s spine. Everything about the girls’ deaths reminds her of a horrifying case she worked on earlier in her career, which saw a killer of the worst kind placed behind bars.

The next day, that feeling is heightened when she receives a chilling note saying ‘I’m back’. Is this killer a copycat or did Natalie put the wrong person in prison all those years ago? In a small town, where no stranger goes unnoticed, what is Natalie missing?

Consumed by the case, determined to prevent more deaths, Natalie misses the fact that it is her attention the killer wants. And to get it, he has his sights set firmly on her precious daughter Leigh…

Gripping, fast-paced and nail-bitingly tense, this book will keep you flying through the pages long into the night. Perfect for fans of Angela Marsons, Rachel Abbott and Karin Slaughter.

Readers are going crazy for The Blossom Twins:

‘Wow, I just didn't want to put this down. I've heard of having the rug pulled out from under you but I felt more like I'd had a house dropped on me with this storyline.’ Goodreads Reviewer, ⭐⭐⭐⭐⭐

‘This book will reel you in, chew you up and spit you out a completely broken and emotionally spent mess. Author Carol Wyer threw all of herself and her emotion into writing this book and it shows. You have been warned… You will be left reeling by the final reveal.’ Jen Med’s Book Reviews, ⭐⭐⭐⭐⭐

‘Wow! Just wow! This book has floored me …The huge twist in this book had me weeping and left me shaken to the core. Bravo, Carol!!’ TishyLou’s World, ⭐⭐⭐⭐⭐

‘Another winner in this magnificent series!!... A brilliant read and one that I just flew through till I reached the shocking ending and that was a real stunner that made me gasp!! As always Carol Wyer writes one hell of a clever and absorbing story leaving me desperately needing the next in this gripping series and no hesitation in giving it a 5 star rating and well recommended.’ Goodreads Reviewer,⭐⭐⭐⭐⭐

‘Don’t be fooled by the sweet title because the Blossom Twins has to be Carol Wyer’s most chilling book to date… The story races along at an incredible pace as we join Natalie as she tries to solve the crime and my heart was pounding out of my chest in some parts. The unexpected devastation hit me like a punch to the stomach and shakes Natalie to the core. I felt totally bereft at the end.’ Sincerely Book Angels, ⭐⭐⭐⭐⭐

‘If I could give this more than five stars, I would, absolutely brilliant, shocking, gripping and just perfect

Share your thoughts on The Blossom Twins in the comments below!