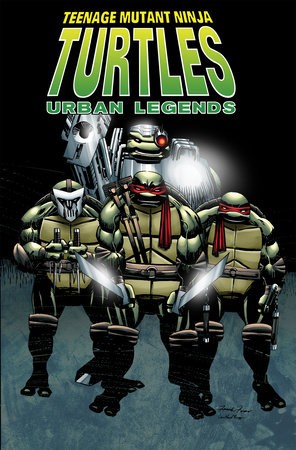 ABOUT TEENAGE MUTANT NINJA TURTLES: URBAN LEGENDS, VOL. 1
This is it, fans! You demanded it–the entire Image Comics TMNT run (a.k.a. TMNT Volume 3) reproduced for the first time ever in full, four-color glory!

Join creators Gary Carlson and Frank Fosco as they take the Heroes in a Half-Shell on some of their most amazing, dangerous, and bizarre adventures ever… culminating in three brand-new issues by Carlson and Fosco to properly close out this long-beloved storyline at last! To kick off this action-packed series, the TMNT are attacked in their lair by a group of cyborgs led by a mysterious female ninja named Pimiko. When the smoke clears, the villains escape with Master Splinter and Donatello as their captives. Can Raph, Leo, and Mikey save the day?

Long out of print and incomplete, Teenage Mutant Ninja Turtles Volume 3 is one of comics’ lost treasures, now uncovered at last and completed by the original creators.

PRAISE
“IDW comes to the rescue by reprinting the original run (in color) and even allowing for an all new story to be created to give the series the ending it never saw almost 19 years ago.” –Biff Bam Pop

“A good way to rediscover some of the comic history of the turtles for new audiences and younger fans.” –Comic Bastards

“A dark and violent take on the Turtles, but it’s well crafted… If you’re an early Image fan, you’ll definitely enjoy this.” –Comic Buzz

Share your thoughts on Teenage Mutant Ninja Turtles: Urban Legends, Vol. 1 in the comments below!