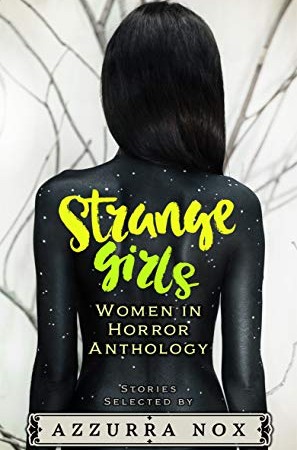 For fans of American Horror Story, Shirley Jackson, and Creepshow.

In Strange Girls, twenty-one authors dare to tackle what makes the girls in this collection different. Vampires, selkies, murderous mermaids, succubus, and possessed dolls take center stage in these short stories that are sure to invoke feelings of quiet terror and uneasiness in the reader. Following the successful debut of Women in Horror anthology with My American Nightmare, Strange Girls is the sophomore effort to showcase these talented women in a genre that is often dominated by the male gaze.

Dare to take a walk on the dark side.

Stories in the Anthology:

24 Hour Diner by Charlotte Platt
Sideshow by Jude Reid
The Doll's House by Alyson Faye
Blood by Red Claire
Self-Portrait with Pears by Rachel Bolton
Personal Demons by Angelique Fawns
Friends with Benefits by E.F. Schraeder
Night Terrors by Angela Sylvaine
The Girl Who Never Stopped Bleeding by Sam Lauren
Leda and the Fly by Marnie Azzarelli
Jenny's Bobo by Hillary Lyon
Extinguishing Fireflies by Rebecca Rowland
The Eyes of the Dead by Danielle R. Bailey
My Mirror Wife by Ash Tudor
Patterns of Faerytales by Azzurra Nox
Campfire Tales: The Bloody Rings by Emma Johnson-Rivard
Cracked by Regan Moore
Angel of Death by Phoebe Jane Johnson
Her Garden Grows by Maxine Kollar
Revival by Madison Estes
A Song Only She Can Hear by Wondra Vanian
Tribal Influence by Erica Ruhe

Share your thoughts on Strange Girls in the comments below!