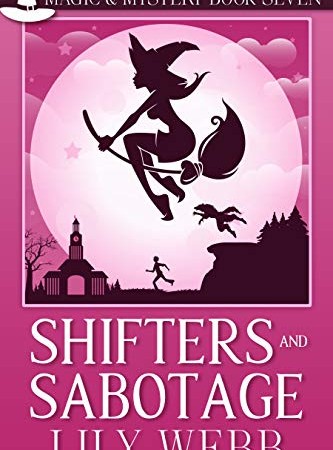 All’s fair in love and roar…

Zoe Clarke’s life is changing shape. After solving a litter of paranormal mysteries, Zoe’s ready to slow down and focus on domestics with her new live-in shifter boyfriend, Beau.

But someone in Moon Grove is eaten up with jealousy about their relationship — as Zoe learns from the series of disturbing anonymous letters addressed to Beau in their mailbox. So when Zoe finds Beau trapped in his golden retriever form, it's up to her to sniff out what happened.

From his obsessive co-workers to the secretive community of shifters surrounding him, Zoe's convinced the attacker is someone in Beau's pack — until another prominent shifter is found locked in their animal form.

Can Zoe track down the culprit and reverse the shifter curse? Or will the attacker take a bite out of her too?

Shifters and Sabotage is the seventh book in the Magic and Mystery series of witch cozy mysteries. If you like shady shifters, raving reporters, and magical murder mysteries, then you’ll love this lighthearted seventh entry in Lily Webb’s spellbinding series.

Buy Shifters and Sabotage to continue solving the mysteries of Moon Grove today!

Share your thoughts on Shifters and Sabotage in the comments below!