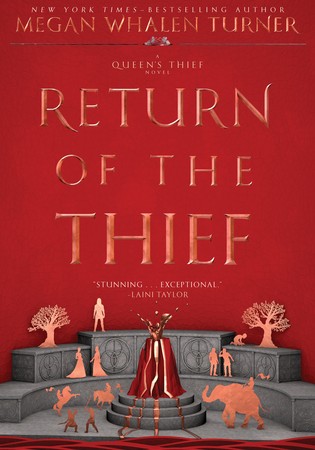 Return Of The Thief

Return Of The Thief RELEASE DATE

Return Of The Thief Synopsis

The thrilling, twenty-years-in-the-making, conclusion to the New York Times–bestselling Queen’s Thief series, by Megan Whalen Turner. This beloved and award-winning series began with the acclaimed novel The Thief. It and four more stand-alone volumes bring to life a world of epics, myths, and legends, and feature one of the most charismatic and incorrigible characters of fiction, Eugenides the thief. Now more powerful and cunning than ever before, Eugenides must navigate a perilous future in this sweeping conclusion. Perfect for fans of Leigh Bardugo, Marie Lu, Patrick Rothfuss, and Sarah J. Maas.

Neither accepted nor beloved, Eugenides is the uneasy linchpin of a truce on the Lesser Peninsula, where he has risen to be high king of Attolia, Eddis, and Sounis. As the treacherous Baron Erondites schemes anew and a prophecy appears to foretell the death of the king, the ruthless Mede empire prepares to strike. The New York Times–bestselling Queen’s Thief novels are rich with political machinations, divine intervention, dangerous journeys, battles lost and won, power, passion, and deception.

Share your thoughts on Return Of The Thief in the comments below!

The Year Shakespeare Ruined My Life