Welcome to the dedicated book release dates page for Her Kind. We gather all the latest book and novel news to bring you the most accurate new release schedule for Her Kind. 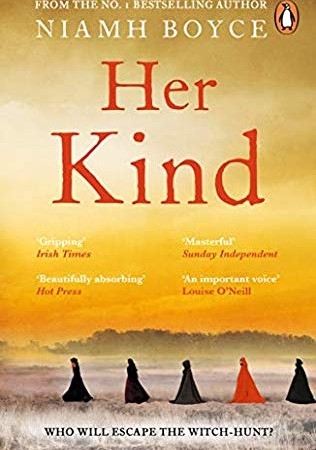 'Gripping ... a story of loss, ambition, misogyny, family love and what it means to belong ... evocative and atmospheric' Irish Times

'Masterful ... Boyce delicately unfolds this atmospheric, magical thriller with pace and juice, while also making sure that the sentiments (vilification of women, policing of female biology) echo through time' Sunday Independent

1324, Kilkennie: A time of suspicion and conspiracy ... A place where zealous men rage against each other - and even more against uppity women

A woman finds refuge with her daughter in the household of a childhood friend.

The friend, Alice Kytler, gives her former companion a new name, Petronelle, a job as a servant, and warns her to hide their old connection.

But in aligning herself with a powerful woman, Petronelle and her child are in more danger than they ever faced in the savage countryside ...

Tense, moving and atmospheric Her Kind is vivid reimagining of the events leading to the Kilkenny Witch Trial.

'Shines a light on women who have been silenced. This tightly paced novel confirms Boyce as an important voice in Irish literature' Louise O'Neill

'Pulls us into a world both seductively alien, yet uneasily, all-too-humanly, familiar' Mia Gallagher

'Beautifully written and transports us to the 14th century, though its themes loudly resonate today' Eileen Dunne, RTE.ie

'The plot is pacey and menacing, and the writing is clear, sharp and studded with glistening phrases ... a wonderful shout through time' Nuala O'Connor

Praise for The Herbalist:

'An elegant morality tale about the inescapable strictures of women's lives ... Her publisher describes her as "a dazzling new voice". I cannot disagree' Sunday Times

'Comparisons to Edna O'Brien and Pat McCabe are more than justified. That said, Boyce has a unique voice and sensibility, one that's entirely her own' Image Magazine

Are you eagerly awaiting the release of Her Kind? Looking forward to reading Her Kind? Have you already got your hands on Her Kind?

Share your thoughts on Her Kind in the comments below!