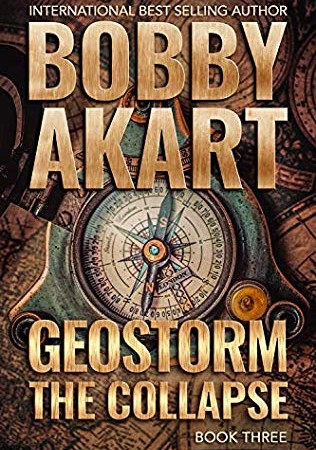 As the magnetic field reverses, a well-intentioned president tries to avert the worst-case scenario ~ The Collapse of the power grid.
But does his decision create mayhem nonetheless?
In an attempt to avoid the collapse of society, does he cause it?

"Geostorm will leave you breathless!"

International bestselling author Bobby Akart delivers up-all-night survival thrillers in The Geostorm Series, the story of a planet-changing phenomenon, a natural disaster brought about by the Earth itself.

"Pulse pounding excitement. Akart pulls you into the story with his masterful writing talent until you are holding your breath captivated by the plot twists and each turn of the page leading you deeper into the world he has spun."

A cataclysmic scientific phenomenon is building deep within the Earth. Evidence emerges that the planet's magnetic field is reversing due to a sudden, rapid pole shift. It's happened before, and it is happening again only ...

This time it's different. Modern civilization, life as we know it, is facing its greatest challenge. The Sun, our beloved star that gives us life, threatens us with each passing day. The Earth's protective shield, the magnetic force field that protects us from cosmic rays, is decaying at a much faster rate than scientists ever contemplated.

There is hope. As dire as the crisis may seem, hope lingers as a plan is implemented to protect America's power grid from the impact of a devastating geostorm. But does this plan have the unintended consequences of bringing the nation to its knees?

"Only Akart can weave a story that begins so calm, so normal and before you know it, you are at the end of the book with your pulse pounding in your chest and your mind screaming for more."

Will the planet return to the dark ages? Will we destroy civilization ourselves before the Sun gets its chance? Follow the story of the Boone family, Indiana farmers and their children who battle Mother Nature, her animals, and their fellow man, in The Collapse.

Share your thoughts on The Collapse in the comments below!