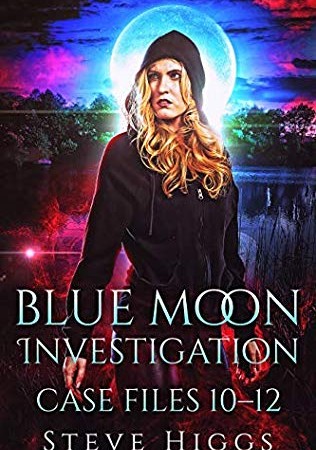 The paranormal? It's all nonsense, but proving might just get them killed.

Delve into a world where supernatural crimes are investigated by two detectives standing alone to protect those that call on them. In the brooding, dark landscape of England, with its rolling hills and forgotten castles, the dark breeds evil in every shadow. Or stupid, some of them definitely just contain stupid.

With millions of pages read and thousands of books sold, the Blue Moon paranormal investigation series will grip you from the start and rob you of sleep as you continue turning pages until well after your bedtime.

It is action-packed, but funny, fast-paced yet intriguing and there are 15 stories already written. Get the third instalment of case files and 3 excitement-filled stories in this omnibus edition and save a pile against buying them individually.

Paws of the Yeti - When he is called to investigate a Yeti attack in the French Alps, Tempest Michaels is certain it will just be another fool in a costume - He's going to solve the case in five minutes and spend a few days skiing. Yay! Guess again. The mountain, the locals, and above all, the Yeti, have other plans in mind. With the Dachshunds doing their best to avoid the cold and Big Ben distracted by the abundant snow bunnies on offer, Tempest is in for a tougher test than he expected.

Under a Blue Moon – The origin story. Wonder how this all came about? When a newspaper ad typo sends all manner of daft paranormal enquiries his way, P.I. Tempest Michaels has no sense of the trouble and danger heading his way. In no time at all, he has multiple cases to investigate, but it's all ridiculous nonsense like minor celebrity Richard Claythorn, who believes he is being stalked by a werewolf and a shopkeeper in a nearby village with an invisible thief.

Night Work - For Jane Butterworth, the paranormal is just a day job. She works as the assistant at the Blue Moon Investigation Agency, a firm that specialises in cases that no one else will take, cases that start at strange and unexplainable and tier rapidly south from there. Bodies of dead cops have been showing up in nearby Biddenden Lake, the site of an unexplained death three years ago. Is there a link between that death and these? The whole area is steeped in ancient history, ghost stories are two-a-penny here but is she really cut out to be a detective? There's no one else to take the case so it's time to put her big girl pants on.

Praise for the Blue Moon Investigation series and Steve Higgs:
'Be prepared to struggle with getting anything else done, as you will want to keep reading.'

'Supernatural overtones with a hint of sexual tension, interspersed with humor make this a fantastic book.'
'Truly delightful tales of mystery and misadventure.'

'Higgs is a wonderful author with great character development which includes an enticing cast of misfits.'

'A great crime comedy with a group of zany characters. I really enjoyed the book and look forward to the next one. Highly recommended!'

'Higgs makes everything and everyone come alive.'

Share your thoughts on Blue Moon Investigations: Case Files 10-12 in the comments below!